Hi everyone, I’m Jin Wei from AISpeech, a high-tech company specialized in computer speech recognition and analysis, and I’m here to talk about the integration of Apache APISIX with K8s instead of native ingress.

At the time of writing, Apache APISIX has already been applied to our production environment and taken over some of the business entry traffic. We are gradually migrating the native ingress traffic over, as shown in the figure below. 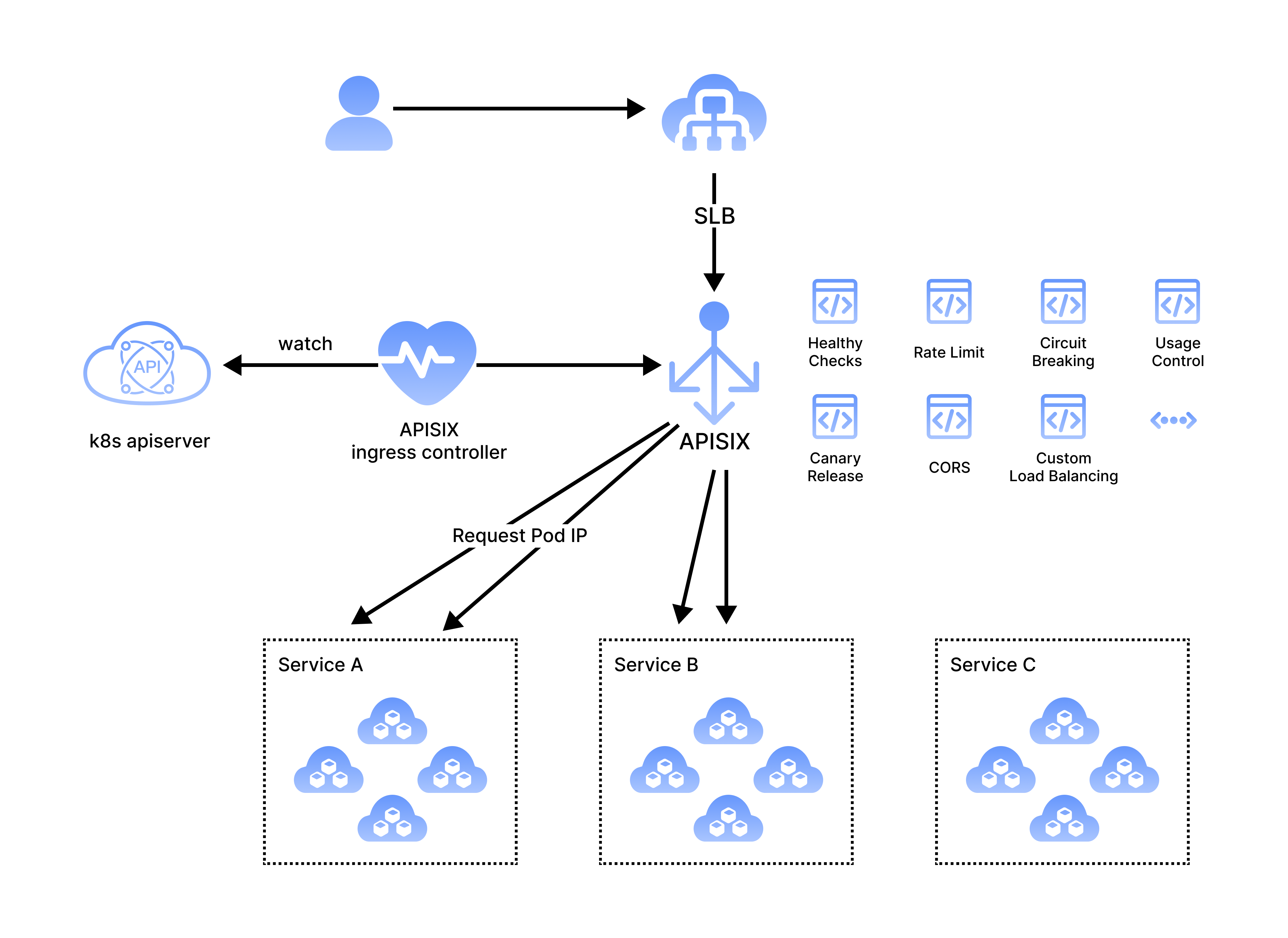 Actually, APISIX-ingress-controller registers the pod ip to the upstream node, so that the business traffic can access the pod directly and bypass the kube DNS. You can implement some particular load balancing policies via plugins based on it. Therefore, on one hand, we rely on this dynamic routing capability of Apache APISIX for traffic distribution. On the other hand, we add some custom plugins to meet business needs.

In a word, Ingress is a way for Kubernetes to handle external traffic.

Since the services within a Kubernetes cluster are virtual networks, external traffic requires at least a public ip and a properly mapped port to access the internal services inside of the cluster.

Kubernetes has a variety of ways (NodePort, LoadBalancer, Ingress, …) to expose interfaces to access Kubernetes internal services. In comparison, Ingress is definitely a more economical way to achieve reverse proxy by exposing a limited number of public IPs.

Speaking of reverse proxies, we can also build an NGINX directly to do so, but it is significantly more difficult to maintain to synchronize the readily variable service status in Kubernetes in NGINX.

The NGINX ingress controller helps us maintain status synchronization between the Kubernetes cluster and NGINX, and provides basic reverse proxy capabilities, so why we build our own ingress? We expect more from the ingress controller to meet more business needs.

After using the Kubernetes native ingress controller, we found the following issues to be prominent:

Due to the powerful routing and scaling capabilities of Apache APISIX, using Apache APISIX as an implementation of Ingress can easily solve the above mentioned pain points and provide the community with an additional Ingress controller option. The timing diagram is as follows: 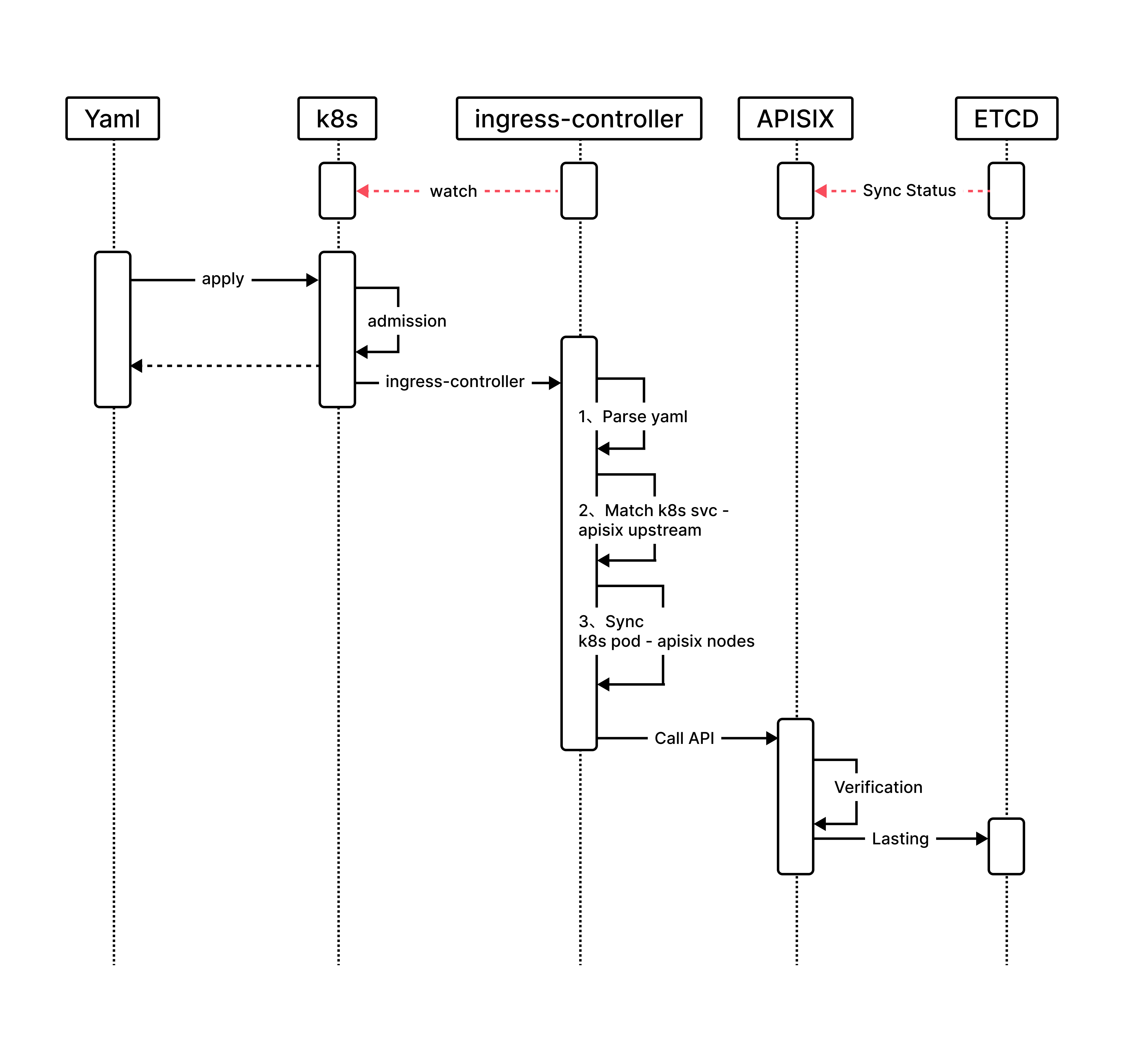 In order to quickly integrate Apache APISIX and take advantage of it, we created the Apache APISIX ingress controller project (everyone is welcome to participate), which currently implements the first type of basic problem: synchronizing Kubernetes pod information to Apache APISIX upstream, while implementing a primary backup to solve its own high availability problems.

Since Kubernetes uses YAML to define cluster status declaratively, we need to define CRD (Custom Resource Definitions) for the objects (route/service/upstream/plugin) in Apache APISIX to be integrated into Kubernetes.

Also, to facilitate the migration of existing Kubernetes ingress users, we will try to be compatible with the existing ingress configuration items.

These features will be the goal of our next efforts, and we welcome your participation.