Handling Layer 4 of traffic and Implementing Memcached Server by OpenResty

In a few previous articles, we introduced some Lua APIs for handling requests, which are all related to Layer 7. In addition, OpenResty provides the stream-lua-nginx-module module to handle traffic from Layer 4. It provides instructions and APIs that are basically the same as the lua-nginx-module.

Today, We'll talk about implementing a Memcached server with OpenResty, which only needs about 100 lines of code. In this little hands-on, we'll use a lot of what we've learned earlier, and we'll also bring in some of the content from the testing and performance optimization chapters later.

We know that HTTPS traffic is becoming mainstream, but some older browsers do not support session tickets, so we need to store the session ID on the server side. If the local storage space is insufficient, we need a cluster for storage, and the data can be discarded, so Memcached is more suitable.

At this point, introducing Memcached should be the most straightforward solution. However, in this article, we will choose to use OpenResty to build a wheel for the following reasons.

Since we want to implement a Memcached server, we need to understand its protocol first. Memcached protocol can support TCP and UDP. Here we use TCP. Below is the specific protocol of get and set commands.

We also need to know how the "error handling" of the Memcached protocol is implemented besides get and set. "Error handling" is very important for server-side programs, and we need to write programs that handle not only normal requests but also exceptions. For example, in a scenario like the following:

Also, we want to write a Memcached-compatible client application. This way, users don't have to distinguish between the official Memcached version and the OpenResty implementation.

The following figure from the Memcached documentation describes what should be returned in case of an error and the exact format, which you can use as a reference. 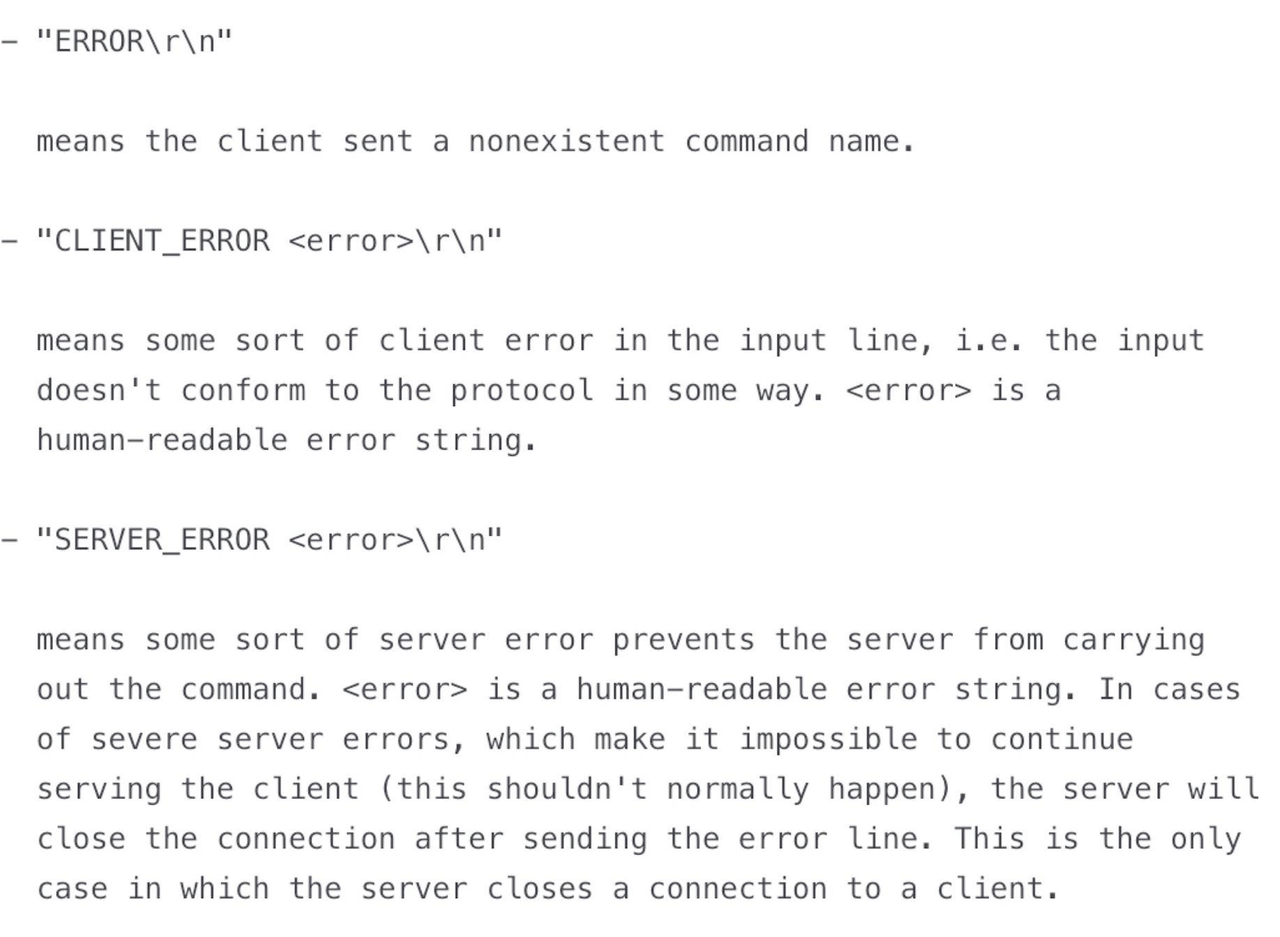 Now, let's define the technical solution. We know that OpenResty's shared dict can be used across workers and that putting data in a shared dict is very similar to putting it in Memcached. They both support get and set operations, and the data is lost when the process is restarted. Therefore, it is appropriate to use a shared dict to emulate Memcached, as their principles and behavior are the same.

The next step is to start working on it. However, based on the idea of test-driven development, let's construct the simplest test case before we write the specific code. Instead of using the test::nginx framework, which is notoriously difficult to start with, let's start with a manual test using the resty.

This test code uses the lua-rety-memcached client library to initiate connect and set operations and assumes that the Memcached server listens on port 11212 on the local machine.

It looks like it should work fine. You can run this code on your machine, and, not surprisingly, it will return an error like failed to set dog: closed, since the service is not started at this point.

At this point, your technical solution is clear: use the stream module to receive and send data and use the shared dict to store it.

The metric to measure the completion of the requirement is clear: run the above code and print the dog's actual value.

So what are you waiting for? Start writing code!

My habit is to build a minimal runnable code framework first and then gradually populate the code. The advantage of this is that you can set many small goals during the coding process, and the test cases will give you positive feedback when you accomplish a small goal.

As you can see, several key pieces of information are in this configuration file.

Next, it's time to build the code framework. You can try it yourself, and then let's look at my framework code together.

This code snippet implements the main logic of the entry function run(). Although I haven't done any exception handling and the dependencies parse_args, get, and set are all empty functions, this framework already entirely expresses the Memcached server's logic.

Next, let's implement these empty functions in the order in which the code is executed.

Next, let's implement the get function. It can query multiple keys at once, so I use a for loop in the following code.

There is only one line of core code here: local value, flags = mc_shdict:get(key), that is, querying the data from the shared dict; as for the rest of the code, it is following the Memcached protocol to stitch the string and finally send it to the client.

Finally, let's look at the set function. It converts the received parameters into the shared dict API format, stores the data, and in case of errors, handles them according to Memcached's protocol.

In addition, you can use test cases to check and debug with ngx.log while populating the above functions. Unfortunately, we are using ngx.say and ngx.log to debug as there is no break points debugger in OpenResty, which is still a slash-and-burn era waiting for further exploration.

This hands-on project is ending now, and finally, I would like to leave a question: Could you take the above Memcached server implementation code, run it completely, and pass the test case?

Today's question will probably require much effort, but this is still a primitive version. There is no error handling, performance optimization, and automation testing, which will be improved later.

If you have any doubts about today's explanation or your practice, you are welcome to leave a comment and discuss it with us. You are also welcome to share this article with your colleagues and friends so that we can practice and progress together.