From Traefik to APISIX, Horizon Robotics's Exploration in Ingress Controller

In this process, how to ensure the stability and efficiency of the business while the product is rapidly iterating?

In response to the above problems, Horizon Robotics's technical team decided to replace the Ingress Controller. At the beginning of the selection process, the team considered upgrading Traefik to 2.0 to solve the above problems, but since we also needed to use a new CRD to upgrade and the migration cost was expensive, we had to try other Ingress Controller solutions as well.

In the early stage of selection, we mainly compared Apache APISIX, Kong and Envoy. However, other solutions more or less can not meet the needs of existing scenarios in terms of functionality or performance, except for APISIX Ingress. Therefore, we finally chose APISIX Ingress. In addition to some general features, we are more interested in the following points.

As you can see from the architecture diagram below, APISIX Ingress serves as an entry point for all traffic. All accessed traffic enters upstream (business services) through APISIX Ingress whether it is from command line tools, Web, SaaS platforms or OpenAPI. As for authentication, since the company has a dedicated authentication service itself, it directly uses APISIX's forward-auth plugin to achieve external authentication. 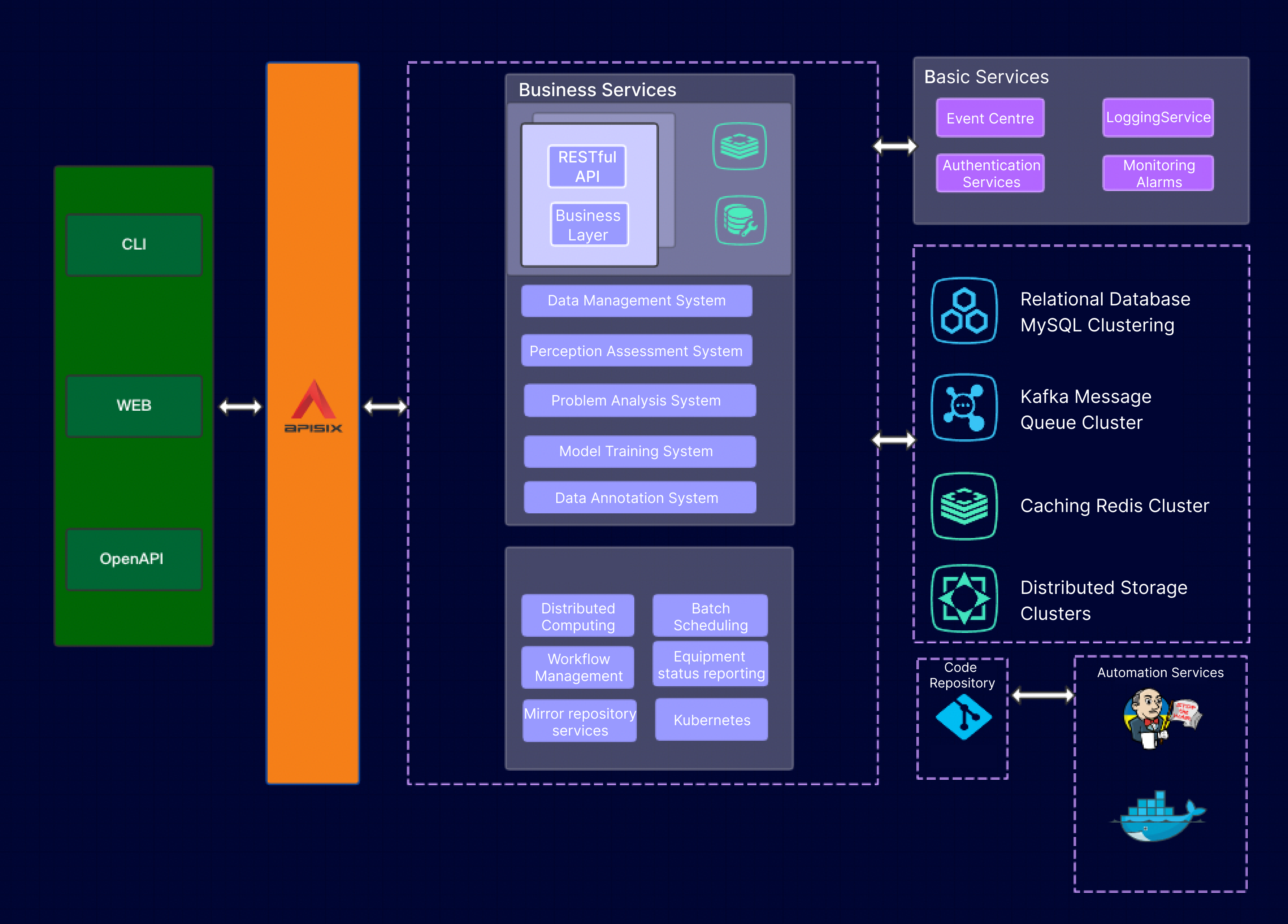 At the gateway layer, all traffic enters through the domain name, and the traffic will first pass through LVS, which will be forwarded to the back-end APISIX node, and then APISIX will distribute the traffic to the corresponding Pod according to the routing rules. On LVS, they also changed the default port of APISIX Ingress from 9180 to 80 in order to make LVS point directly to APISIX Ingress, which makes it easier to forward the traffic.

After understanding the overall architecture, we will share a few scenarios that our company is currently implementing with APISIX Ingress.

First is the large file upload scenario, which may be less common in general companies, but is more common in companies that do AI model training. This scenario is mainly in the Horizon Robotics model training system, where the data collected by R&D will be uploaded to the system through the network, and the size of the data is usually over several hundred GB, and OOM will occur when the amount of uploaded data is too large without adjusting any parameters of APISIX.

Because the default client_body_buffer_size is 1MB, when the buffer is full, the temporary files will be written to disk, thus causing high disk IO.

If the directory where the temporary files are written is pointed to the shared memory (/dev/shm), this again leads to high APISIX (cache).

After continuous debugging, we found the reason was that APISIX did not enable streaming upload. For this scenario, we upgraded APISIX version from 2.11 to 2.13 and adjusted APISIX parameters. First, we changed the parameter proxy_request_buffering to off from APISIX ConfigMap to enable streaming upload. Second, we extracted the reusable configuration from the CRD ApisixPluginConfig provided by the APISIX Ingress Controller and dynamically set the client_max_body_size for the routes that need this scenario as namespace level configuration.

For service calls in multi-cloud environments, part of the business traffics first arrive at the local IDC, and then go through APISIX Ingress to reach the Pod. Some services in the Pod will access AliCloud's services through the domain name. In addition, some scenarios where the service invokes other services also exist mainly for multi-cloud training. Users will take IDC as the entry point and select the cluster to submit the task to the corresponding cloud cluster.

When we first started using APISIX Ingress, APISIX did not support the forward-auth plugin, so we defined a custom plugin based on apisix-go-plugin-runner, but this created an additional layer of gRPC calls, which made debugging difficult and logging invisible. Since APISIX supported the forward-auth plugin at the beginning of this year, we replaced the custom plugin with the official one, which reduces one layer of gRPC calls and makes monitoring more convenient.

In application monitoring, we enabled APISIX Prometheus plugin globally and made some debugging and optimization for our own business, such as adding real-time concurrency, QPS, APISIX real-time API success rate, and APISIX real-time bandwidth for more granular monitoring of APISIX.

We are currently using Apache APISIX Ingress Controller as a traffic gateway only for some of our business lines, and will go live with other businesses to bring richer application scenarios to the community. If you are also comparing Ingress Controller solutions, we hope this article will give you some hints. More and more users are using Apache APISIX Ingress in production environments, and if you are also using APISIX Ingress, please share your use cases in the community.