What Is Service Mesh?

Service mesh is a configurable infrastructure used to manage the interservice communications of microservice systems. It aims to process the traffic between microservice, also called east-west traffic.

In cloud-native applications, an application might consist of hundreds of services. Each service could have multiple instances, and each of those instances might constantly be changing. Under such a complicated running environment, how to provide users with reliable access and keep services running stably has become a huge challenge. Thus, a solution called service mesh was born.

Service mesh is like the TCP/IP between microservices, which handles interservice functions like network calls, rate limiting, monitoring, etc. We mainly apply service mesh to the Kubernetes platform. Also, the most classic pattern is called sidecar, which abstracts some general functions into the sidecar container and mounts it together with the service container into the same pod. The below image demonstrates why it is called service mesh.

Sidecar is not the only pattern that applies service mesh; besides that, we have the DaemonSet pattern and Ambient mesh pattern:

In addition, Ambient mesh uses a shared agent called ztunnel (zero-trust tunnel), which runs at every node inner the Kubernetes cluster and securely connects and authenticates the workloads inside the mesh. You could read this article if you want to find out details about Ambient mesh mode: Introducing Ambient Mesh

Why do we need service mesh?

Before service mesh gets popular, many microservices architectures' service governance was achieved through the microservice framework collaborating with the control platform. However, this method has the following issues:

To resolve the above issues, previous Twitter engineer Willian Morgan, one of the founders of Linkerd, proposed the concept of "Service Mesh". Service mesh uses a sidecar pattern to decouple infrastructure with service logic without affecting the application, which achieves a language-unified upgrade and O&M.

Service mesh moves functions such as traffic control, observability, and safety communications to the basic components; thus, developers don't need to worry about the concrete implementations of the communication layer and service management. Developers could leave all the dirty work related to the communication to service mesh and focus on service development. Based on these features, service mesh could help us resolve those earlier-mentioned problems.

How does service mesh work?

Service mesh would not add new functions to the application's running environment, so all applications within a framework still need corresponding rules to specify how to send requests from A to B. The difference is service mesh would extract interservice communications of logics management and then abstract them into an infrastructure layer.

Currently, most service meshes use the data plane + the control plane architecture, which is shown below: 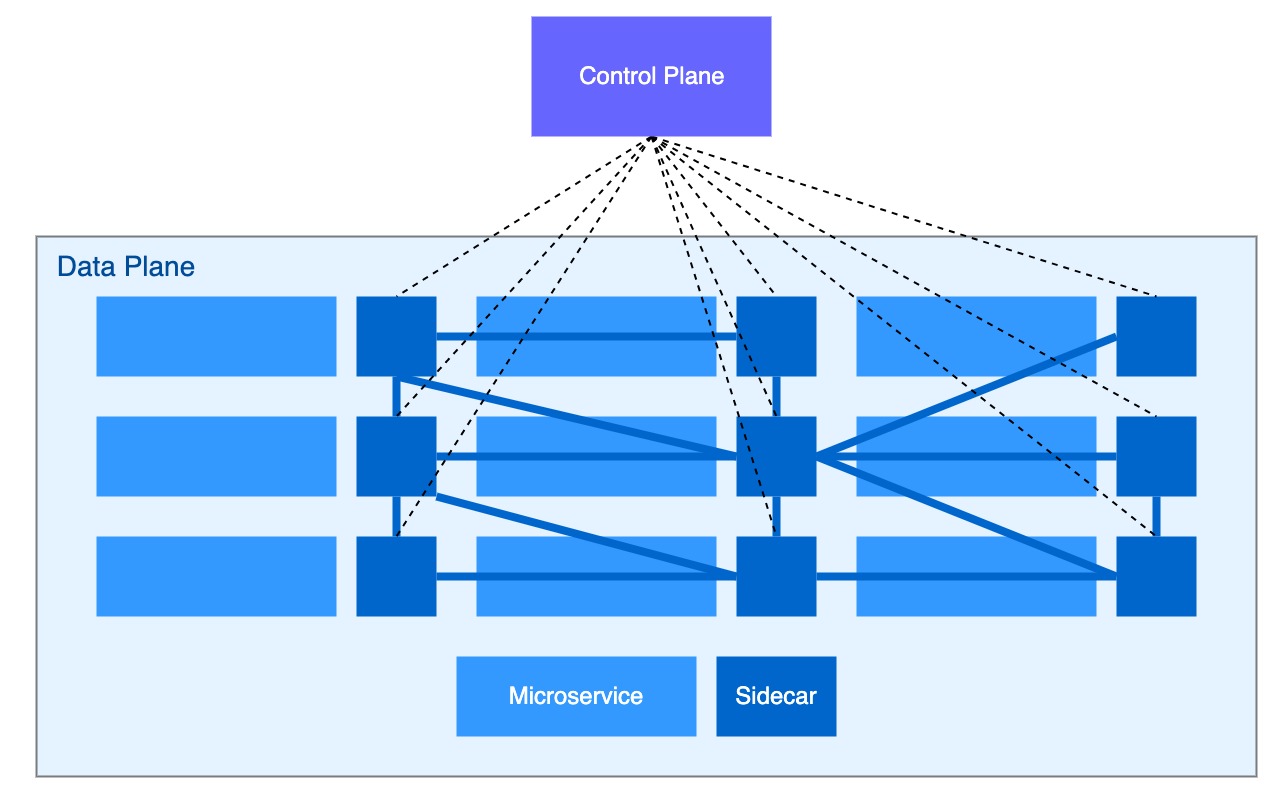 The control plane manages and configures the data plane and conducts strategies while running the service. All instances inside the control plane with a single service mesh would share the same configuration resources.

The control plane focuses more on delivery and strategies like security, observability, and traffic control. It will also gather and collect telemetry data of the data plane thus that DevOps can use them.

The data plane usually works as a proxy and consists of many sidecar proxies. Sidecar would run with the service instances in parallel and control the service application's traffic by intercepting the service data flow.

In the microservice architecture, engineers would usually encrypt exposed public services or limit access to protect the service, but they ignore the communication safety inner clusters. Until now, many microservice applications still lack interservice communication encryptions, and the cluster's internal traffic is even transferred in raw data format. As a result, internal traffic is very likely to suffer eavesdropping attacks and MITM (Man-in-the-middle attack).

To avoid attacks against cluster's internal traffic, we use mTLS to encrypt traffic data. mTLS could secure communication safety between microservices within service mesh. It uses encryption technology to authenticate each microservice and encrypt the interservice traffic mutually. 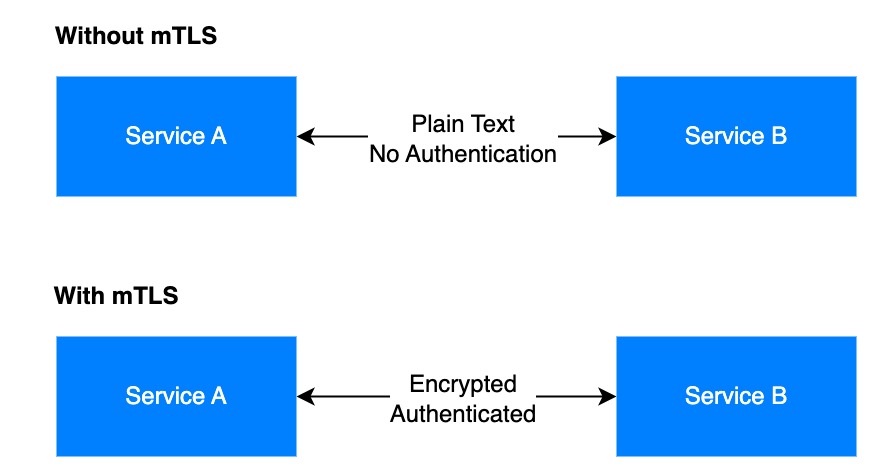 Even though we could directly define the communication safety strategy inside the microservice and implement identity authentication and encryption, it is still very inefficient to implement the same function individually in every single microservice. Adding a new function has to modify the service's codes and invade the service logic. Furthermore, even if we could implement the new function, the later iterations, upgrades, and tests will still require developers to spend more time maintaining. Thus, developers couldn't focus on the service function development. 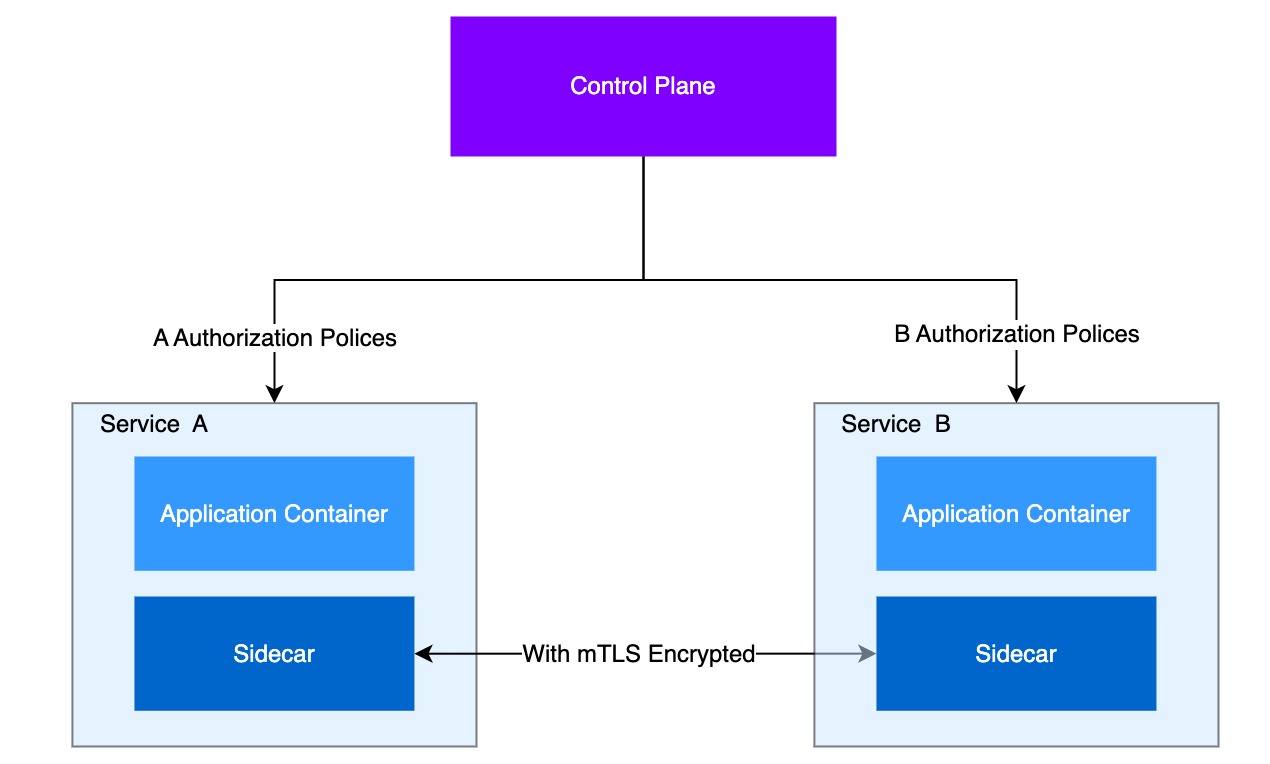 From this scenario, everyone could understand why service mesh could expand current functions without affecting current service. But, of course, apart from achieving internal traffic safety configuration function, which is similar to mTLS, service mesh could also rapidly expand functions like traffic control, observability, and codec protocol by modifying the configuration of the control plane.

This article briefly introduces the basic concepts of the service mesh, its working principle, and the benefits it brings us. Service mesh revolutionizes the microservice architecture and helps developers get rid of the complex microservice running environment to focus on service function development.

Even though service mesh resolves many pain points in the microservice architecture, it still has limitations. The complexity of software development is eternal, and it is just transferred from one part to another. When we abstract service management into a separate layer, we have to face additional O&M difficulties and increases in traffic links. Furthermore, service mesh needs to be used under a cloud-native environment, which sets a higher bar for DevOps's professional ability and engineering working experience. That is why we say technology is just a tool to resolve problems, but we need to weigh the benefits service mesh brings according to its practical application.

If you want to know more about API management, contact us whenever you want: https://api7.ai/contact.