How to Use Secret Manager with API Gateway

In an IT data environment, a secret is a digital privilege credential, usually used by systems and applications for authentication or as input to encryption algorithms. For example, passwords needed to connect a program to a database, private keys/certificates for encrypted communication, etc., all belong to the scope of secret.

Common types of secret include:

The Secret Manager stores, retrieves, rotates, and audits secret throughout its lifecycle. HashiCorp Vault is one of the most commonly-used Secret Manager services, and its working principle is as follows (picture from HashiCorp official website):

Using a Secret Manager to build applications not only enhances security but also provides the following functions:

Use Secret Manager in API Gateway

As the entrance of business traffic, the API Gateway often contains a huge amount of secret information, such as API keys and tokens for authentication. Therefore it is vital to integrate a Secret Manager into API Gateway.

Key Auth is a simple authentication method in the API Gateway. Users need to preset a key, and when the client has API requests, the preset key is written to the corresponding request header or accessed as a request parameter to pass authentication. However, key leaks are common, and keys are often stored in the configuration files or saved as variables in code. If keys are not properly stored, they could even appear in the public code repositories such as GitHub, posing a significant threat to security. Administrators often update these keys regularly to prevent serious harm caused by key leaks. However, for some static keys, individually updating the configuration file on each machine can also pose a significant threat to the stability of the service. 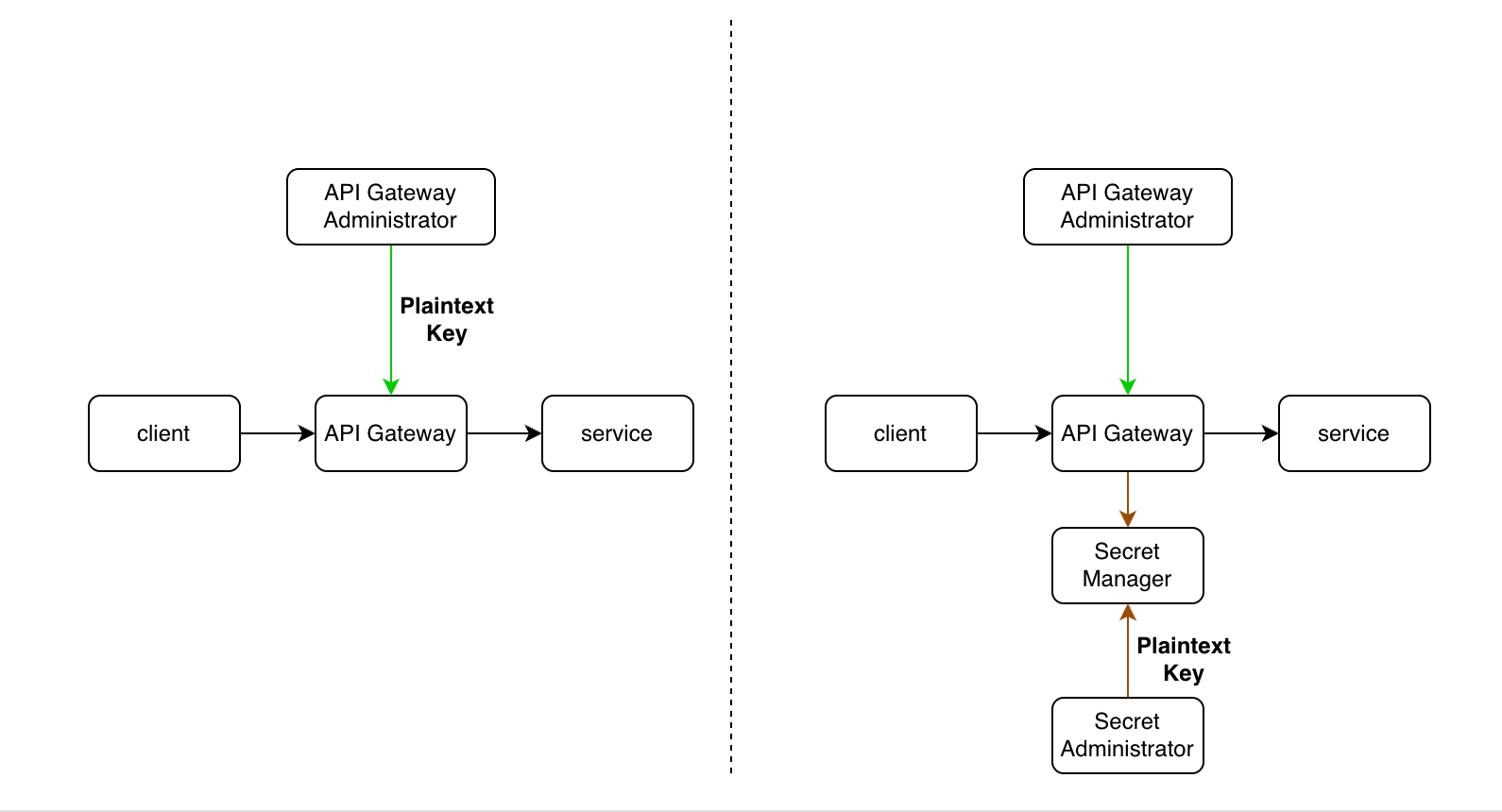 We will use Apache APISIX as an example below to show how to use the Secret Manager to store the preset key for Key Auth in the API Gateway.

Example of Using Apache APISIX in Secret Manager in Practice

In version 3.1.0, Apache APISIX introduced the APISIX Secret to integrate different Secret Manager services. Its work sequence is as follows: 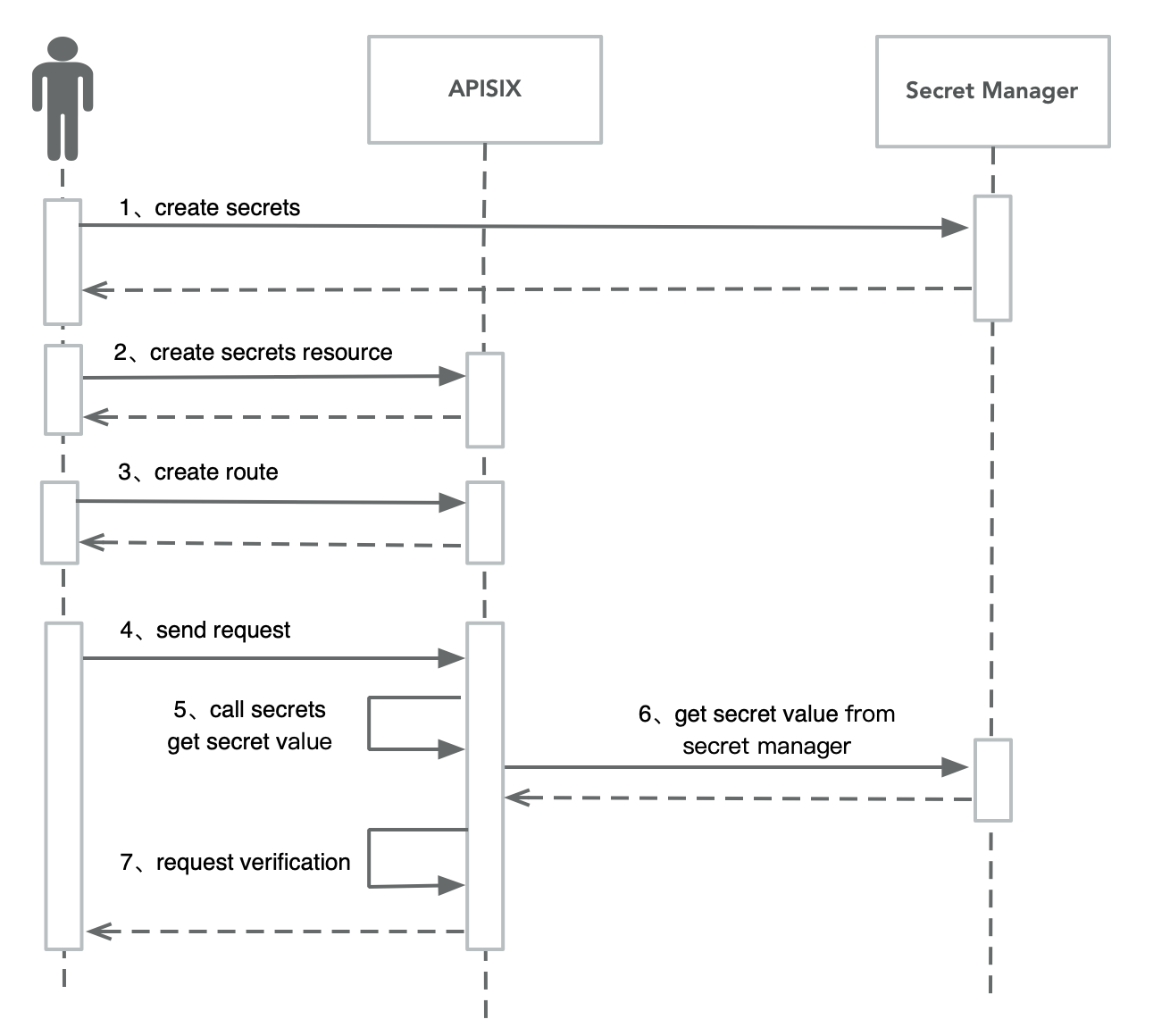 Below, we use Vault as the Secret Manager service. We will use Key Auth authentication to illustrate how to use a Secret Manager to save keys in Apache APISIX.

Before creating the key, you need to start the Vault service. Since this section shares the best practices for using Vault in the Apache APISIX ecosystem, the configuration of Vault itself is not described in detail and can be found here.

To create the corresponding key in Vault, you could use the following command:

After executing the above command, you will find a key named auth-key under apisix/jack path, with a value of value.

First of all, add the secret resource through the Admin API and configure the address as well as other connection information for Vault:

Then, use the key-auth plugin to create a consumer and perform Key Auth authentication for the corresponding route or service. The key field refers to the APISIX Secret resource:

Via the above two steps, when the user's request hits a key-auth plugin, the Secret component will call the user-configured Secret Manager through the provided interface to obtain the key's actual value in Vault. If the value of the key is not found, the plugin will record the error and fail to perform the Key Auth validation.

Through the above steps, you can store the key needed for Key Auth authentication in Vault instead of displaying it in plain text while configuring the plugin.

For more information about API gateway, please visit our blogs or contact us.