A Coredump Story About NGINX ctx and error_page

Coredumps in the production environment are terrifying for engineers, especially when the crashes occur in the middle of the night. I experienced it myself more than a decade ago. Trying to locate this “ghost” bug that only appeared in the nighttime, the whole team went back home to sleep in the afternoon and came back to the company at 12 am to wait for the crash and check each service one by one. Imagine a dark night and an office building with only a few workstations lit, watching the constantly beating monitor for data and logs – an intense and exciting experience. We stayed for three nights before locating the bug and solving it, which was an unforgettable experience.

Little did we know that we would experience this once again. It's just that this time it was not our own service, but the client’s online service had a coredump. This was more challenging than our own controllable environment:

In short, this problem was unable to reproduce, with no complete source code, and no environment to test. However, we had to locate the error, find a way to reproduce and give a fix eventually. During the process, we had a lot of challenges and learned a lot from them. Here we are posting some interesting points encountered during the debugging process. I hope they will provide some guidance when people are debugging for NGINX and APISIX.

After the user upgraded APISIX from the 2.4.1 version to the 2.13.1 version, coredumps occurred cyclically, with the following error message:

From the coredump message, we could see that the segmentation fault occurs in the lua-var-nginx-module. And here is the corresponding data (partial) in memory:

We can see that the data in memory has a problem.

Some Thoughts Before Analysis

For the first scenario, the problem can be easily located if we check the call stack.

For the second scenario, since it is not clear where the error happens in the first place, the code that generated the error and the code that triggered the segmentation fault may not be in the same location, even completely unrelated, causing it difficult to locate. We could only collect more context information involving the crash, such as:

Through this information, we would try to find the bug by reviewing the code and finding a way to reproduce the problem.

1. Context Check of the Errors

After careful analysis, we found that the error usually occurs between 3 am and 4 am, with the following coredump error message:

Since GDB cannot trace Lua’s call stack, we were unable to locate which call produced the error. So, the first thing we would need to do is to get Lua’s call stack; we had two methods to get the call stacks:

Then, we got the following call stack.

Combining both Lua and c’s call stack, we could find that the coredump was because the user called ngx.ctx.api_ctx.var.scheme in the Prometheus plugin. However, the reason for the crash was still unclear, we would need to analyze it further.

The error occurred when accessing a variable from ngx.ctx.api_ctx.var executed a call in the lua-var-nginx-module described above. To increase efficiency, it cached the current request. We remembered the error occurred when the value of the request body had an exception, so the cached request’s validity was also questionable. To verify this thought, we stopped the program from taking the cached memory, but re-fetched the request every time.

The user tested with this modified version for an entire night, and the error did not occur again; we verified that the request body had a problem.

The cached request body was saved in ngx.ctx, and the only place that modified ngx.ctx was in apisix/init.lua.

Why did we need to recover ngx.ctx here? Because ngx.ctx is stored in the Lua registry, the corresponding ngx.ctx can be found through the registry index. And the index was stored in the ctx member of the NGINX request structure. Every time an internal redirect was made, NGINX would clear ctx, and thus the index could not be found.

To solve this problem, APISIX created a table, the table saved the current ngx.ctx before redirecting, and then used ngx.var to record the index of ngx.ctx in this table, whenever it needed to be restored, we could get ngx.ctx directly from the table.

The code in the above figure only got triggered when the user configured error_page instructions, and after an error occurred after internal redirections.

And we knew exactly that the user turned on the error_page instruction after the version upgrade, combined with the error that occurred from the upstream change we described above. All things seemed to be connected. Was it actually the ngx.ctx that created the bug during the error handling process?

With the question, we checked ngx.ctx code related to backup, and we found weirder problems. After failing at set_upstream, it would never take the ngx.ctx recovering step, because it exited early, it would not back up ngx.ctx, and it would not go to the recovery process either. 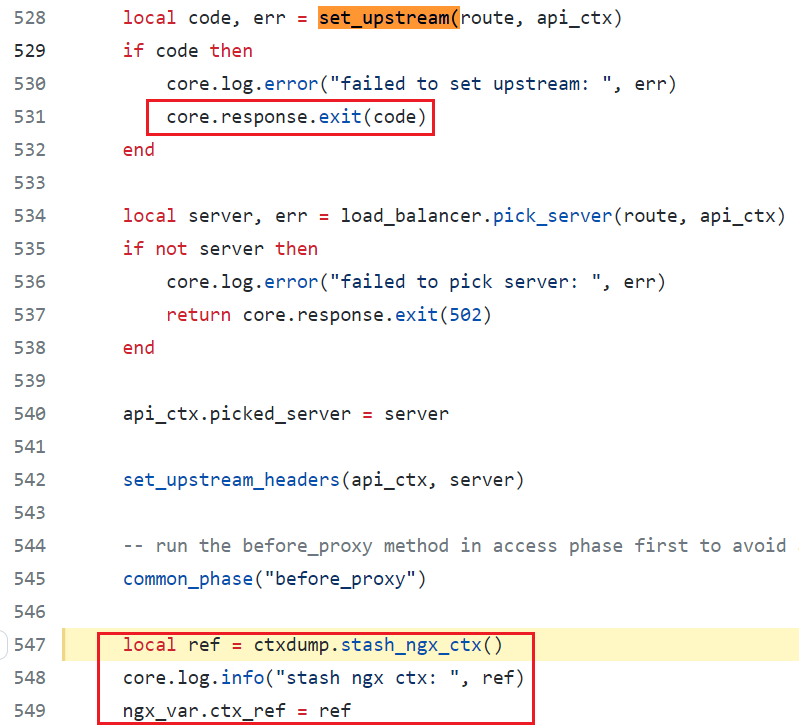 This was obviously a bug! Well, this is because ngx.ctx needed to be recovered after redirecting. And how did this process recover ngx.ctx? Where did ngx.ctx go wrong in the first place? Now there were too many uncertainties, we needed to collect more data.

After discussing, we added a second log on production, and we discovered that, when the error occurred after an internal redirection, ngx.ctx did not go through the recovery process, rather it caused coredump directly!

This was a perplexing phenomenon because if the ngx.ctx did not recover after redirection, ngx.ctx would be empty/null. And there was code that checks for empty values; it should not trigger the coredump code in the plugin.

So, was this error_page internal redirection that caused triggered ngx.ctx to have a problem?

After analyzing and checking, we got a basic understanding of the erroneous process.

set_upstream failed and redirected to error_page’s error processing stage, and the expected empty ngx.ctx had an unexpected value. And due to APISIX’s bug, it didn’t recover ngx.ctx before redirecting, causing ngx.ctx to have dirty data when accessing, thus causing the coredump. To solve this problem, we would only need to recover ngx.ctx after redirecting; the detailed implementation of this commit is provided at the end of the article for reference.

Although we provided a fix for the bug, we were still unable to understand the complete logic of the bug. Because the user didn’t modify the logic of ngx.ctx, the open-source version should be able to reproduce. In order not to continue to affect the user’s production environment and deploying process, we decided to continue to investigate the root cause.

From what we had known, we were unable to reproduce the problem. After analysis, we decided to check two of the following places:

For the first point, during the processing of each filter module of NGINX, it may have some exception branches that affected the ctx members of the request body, thereby affecting ngx.ctx. We checked the user’s modules compiled into NGINX for potential branch exceptions but found no similar problems.

For the second point, after investigation, we have found that during the SSL handshake, ngx.ctx has a problem from reuse. If the HTTP stage could not obtain ngx.ctx, it would try to obtain it from the SSL stage. The SSL stage has its own ngx.ctx, and that might cause problems for ngx.ctx.

Based on the above discoveries, we designed the following conditions, and were able to reproduce the problem successfully:

We finally made bricks without straw. Through conjecture and verification, we finally figured out the complete process of this bug. Once there is a complete reproduction, it is no longer difficult to solve the problem, and the final process will not be described in detail here. I believe that everyone has plenty of experiences in problems that can be accurately reproduced.

The root cause of this problem: because the ngx.ctx is not restored after entering the error_page, all requests on the long connection reuse the same ngx.ctx in the SSL phase. Eventually, causing ngx.ctx to have dirty data and a coredump was generated.

In the follow-up, we also proposed a corresponding solution to this problem: to ensure that ngx.ctx can be restored normally after the internal redirection. Please refer to the specific PR.

If your APISIX uses functions involving internal redirection such as error_page, please upgrade to the latest version as soon as possible.

Writing programs and debugging are scientifically rigorous tasks and there is no room for ambiguity. To solve a problem, we will need to collect information, keep trap of all potential clues, analyze the call stack, and then figure out the context to reproduce the error. Finally, problem solved.