Ingress exposes services in Kubernetes, where traffic routing is controlled by rules configured on the Ingress resource. To satisfy an ingress, you must also have an Ingress controller.

The table below compares the basic features of Ingress NGINX and APISIX Ingress, including protocols, upstream probe/resiliencies, load balancer strategies, authentication, Kubernetes integration, etc. The table is extracted from learnk8s.io.

We can see from the figure below that there are more built-in functions and features in APISIX Ingress than in Ingress NGINX, including protocol support, health checks and circuit breakers, authentication, Kubernetes integration, and so on. 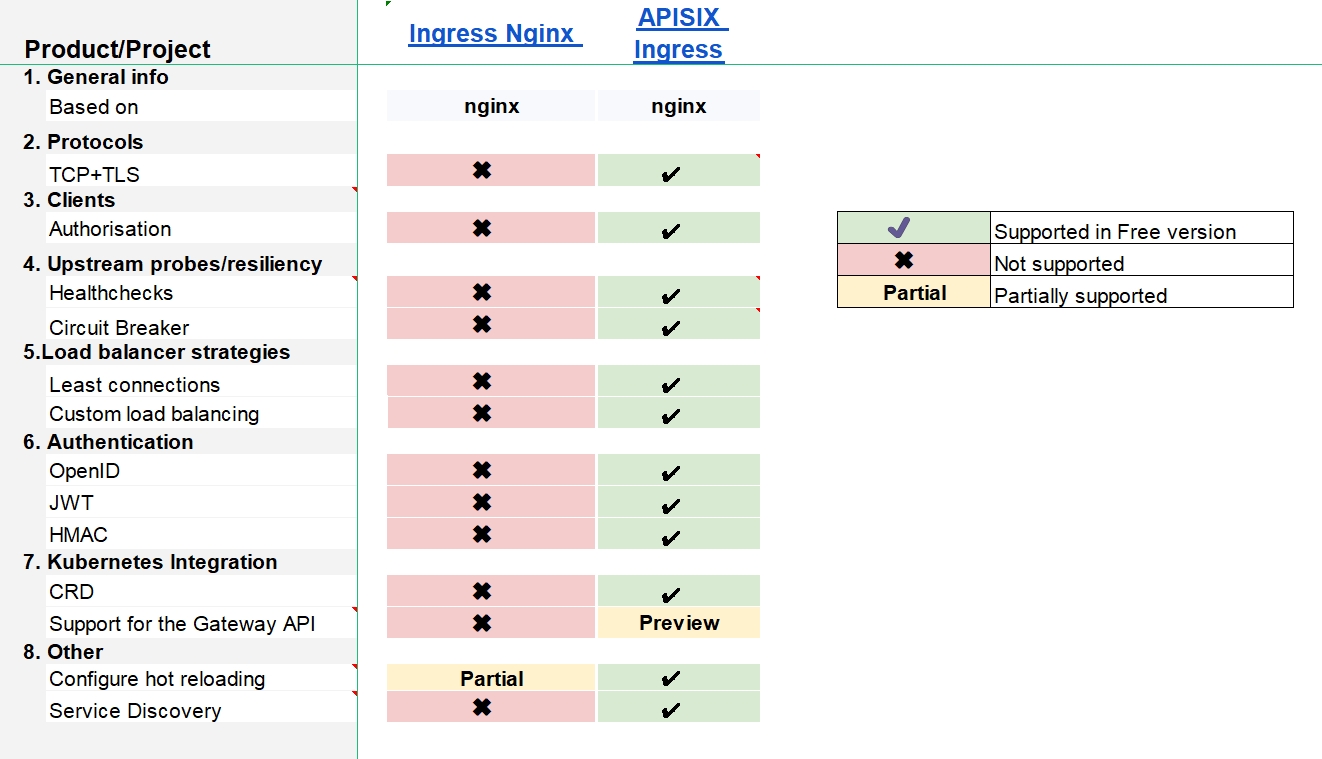 When a node fails or migrates, it is inevitable that the node will be unavailable. If a large number of requests access these unavailable nodes, it will cause traffic loss and business interruption. Therefore, it is necessary to perform health checks on nodes by using probes, and direct requests to healthy nodes, thereby reducing traffic loss.

The health check functionality is not yet supported in Ingress NGINX, but APISIX Ingress provides this functionality:

Similar to the health check feature, the feature of service circuit breaking is not supported in Ingress NGINX. In APISIX Ingress, the api-breaker plugin helps to implement this.

Sample configuration of the circuit breaker in APISIX Ingress:

Ingress NGINX mainly uses Annotations and ConfigMap for configuration, and the supported plugins are relatively limited. If you want to use JWT, HAMC, or other authentication methods, you must integrate them yourself.

When the Ingress controller's basic features cannot meet enterprise users' needs, it can only be customized through extension. Next, we will explain how Ingress NGINX and APISIX Ingress extend their features.

How Ingress NGINX Extends Its Features

Ingress NGINX can only be extended by embedding Lua programs.

How APISIX Ingress Extends Its Features

APISIX Ingress provides a variety of methods to extend features, and enterprise users can freely choose the method according to their own needs. APISIX supports:

In addition, you can directly write Lua code through the serverless plugin to quickly meet business needs.

Ingress is more suitable for enterprise users migrating from Ingress NGINX for its low migration cost. Its shortcomings are also apparent, such as weak semantic capabilities, no standard specifications, etc. And ingress can only be extended through annotations, but annotations cannot support complex scenarios. In comparison, CRD has the following advantages:

Ingress NGINX is implemented mainly based on NGINX configuration files. Although NGINX and Lua are used to achieve feature extensions, it only partially solves the problem of static configuration files. It shows insufficiencies in its routing and reloading capabilities. For example, the NGINX configuration must be reloaded when adding or modifying a rule. With more and more routing rules and certificates, the load operation will take more time, from a few seconds to more than ten seconds. Every reloads of NGINX resets the load balancing state, negatively impacting online traffic, causing short interruptions, increasing response latency, and reducing load balancing quality.

Situations that Trigger an NGINX Reload

The situations listed above cover most usage scenarios of the Ingress controller. In a cluster environment with applications being frequently deployed, operations (creation, update, deletion, etc.) of resources such as Ingress and Secret will be continuously triggered. It will result in a sharp increase in the number of NGINX reloads, significantly impacting the production environment.

Kubernetes Gateway API is more functional than Ingress and is designed to evolve the Kubernetes service networking through expressive, extensible, and role-oriented interface implemented by many vendors and with broad industry support. Gateway API has the following characteristics:

Kubernetes Gateway API is a standard for extending the Kubernetes service mesh. Its Gateway resource can be used as a Kubernetes API to manage the life cycle of the gateway, which is very powerful. Many Ingress controllers actively support it, including Istio, Kong, Traefik, etc. Unfortunately, Ingress NGXIN is not planning to support Gateway API yet (Gateway API Implementation Status), whereas APISIX Ingress already supports most of the features of Gateway API: including HTTPRoute, TCPRoute, TLSRoute, UDPRoute, etc.

After a thorough comparison of APISIX Ingress and Ingress NGINX, we can conclude that both open-source software is excellent and the essential functions of the two are similar. In the microservice architecture, however, APISIX Ingress shows more advantages in supporting service governance and service discovery by providing health checks and circuit breaking.

Ingress NGINX is characterized by its simplicity and ease of use, with some obvious shortcomings, such as difficulties in feature extensions. APISIX Ingress, who joined later, solved NGINX's hot reloading pain point and provided better extensibilities and functionalities. For example, supporting Gateway API and CRD enriches the capabilities of the Ingress controller in terms of project development.

In short, if you want to select an Ingress controller with richer features and better extensibilities, APISIX Ingress is strongly recommended. If you are new to the Ingress controller and don’t have many functional requirements, Ingress NGINX is also a good choice for its simplicity.