As a world-leading enterprise-level consortium blockchain infrastructure supplier and solution provider, Hyperchain Technologies is committed to building innovative infrastructure and empowering the digital development of society. During its rapid growth, Hyperchain met a lot of problems when establishing its Hyperchain blockchain platform, as follows:

Hyperchain tried Kong and NGINX, but unfortunately, they can’t satisfy Hyperchain’s business scenarios. However, after adopting Apache APISIX, all the problems mentioned above are solved, endowing the Hyperchain blockchain platform with endless vitality.

Hyperchain blockchain platform refers to embedding the blockchain framework into the cloud computing platform, taking advantage of cloud service infrastructure’s deployment and management advantages. It is an open blockchain platform that can provide developers with a convenient and high-performance blockchain ecosystem and related support services and also support developers’ business expansion and operation in web3.

As there are many nodes in the chain, ranging from dozens to thousands, it becomes difficult for us to monitor and maintain the operation of the chain without the support of the platform. By using the Hyperchain blockchain platform, users can not only save costs but also manage the blockchain more conveniently and enhance the security of the entire system.

Let’s take Hyperchain as an example to figure out how and why blockchain companies should select Apache APISIX among many API gateways. Below we will analyze APISIX’s application in both the Hyperchain blockchain platform and blockchain node.

APISIX works as the unified entry of internal microservices in the system. External requests are first sent to APISIX; then, they visit the access layer through the API after passing the authentication and later visit the core services through RPC (remote procedure call). Sometimes, the APIs are expected to be exposed under the same domain name. In this case, we can add some prefixes to the API path of the same service, such as /baas-core or /baas-other. When the client requests these APIs, the API gateway needs to strip these added prefixes and then forward the request to the backend service. APISIX’s proxy-rewrite plugin can help us to handle such cases conveniently. 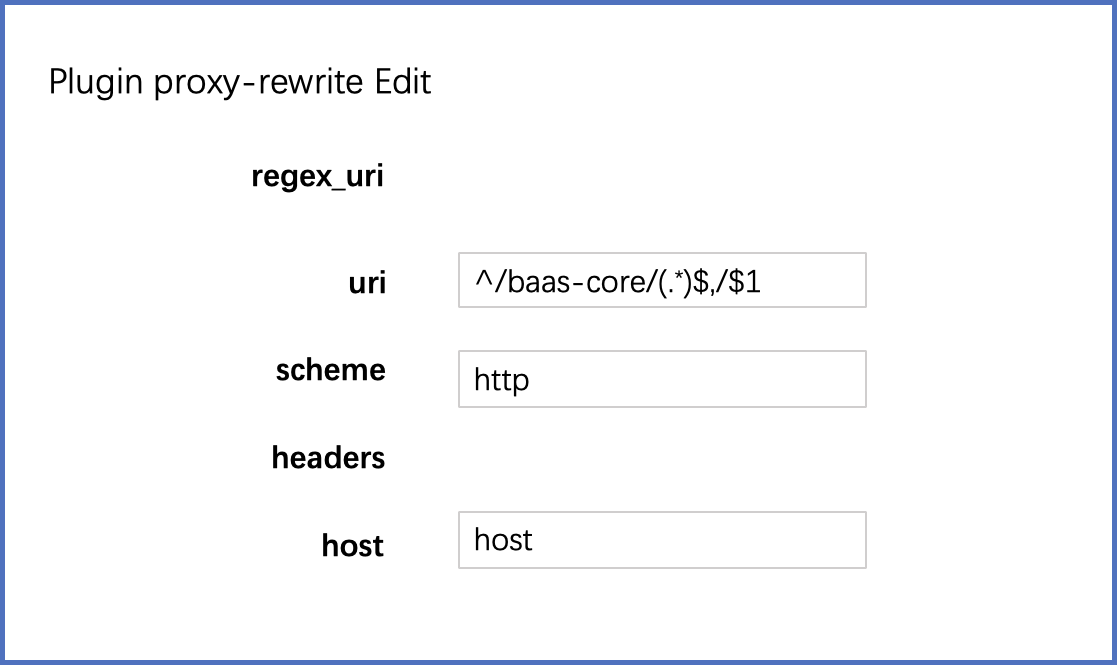 Every call to the drive components is a process that needs to be limited, especially when the number is great. Consequently, APISIX’s limit-req plugin can be beneficial in restricting the traffic input and output of the platform to secure its stability.

The limit-req plugin allows customized configuration about rate and burst. 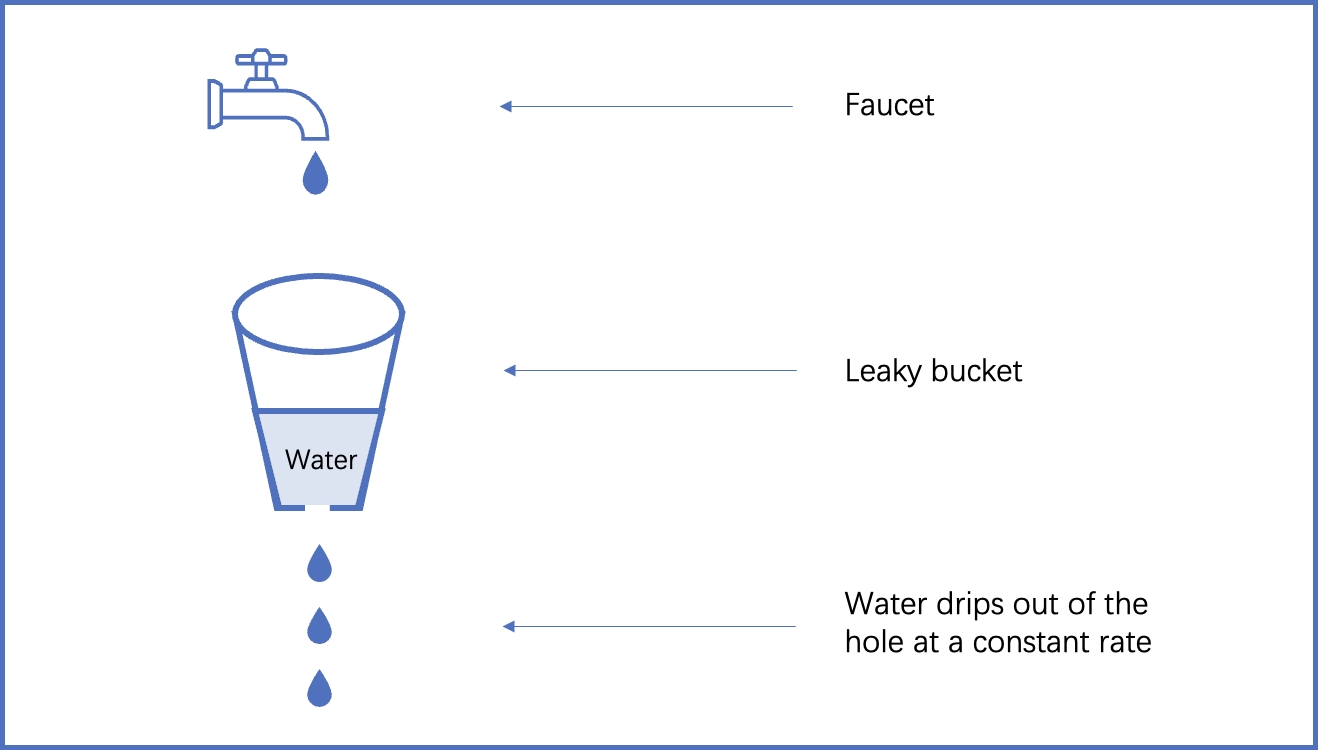 To collaborate with APISIX, Hyperchain developed a plugin for private deployment circumstances. Party A often prefers to use its authentication services or service account system. When the frontend traffic visits the website, it will first go through the Access-auth plugin, and it can access the backend BFF (Backend for Frontend) only if it passes the authentication. 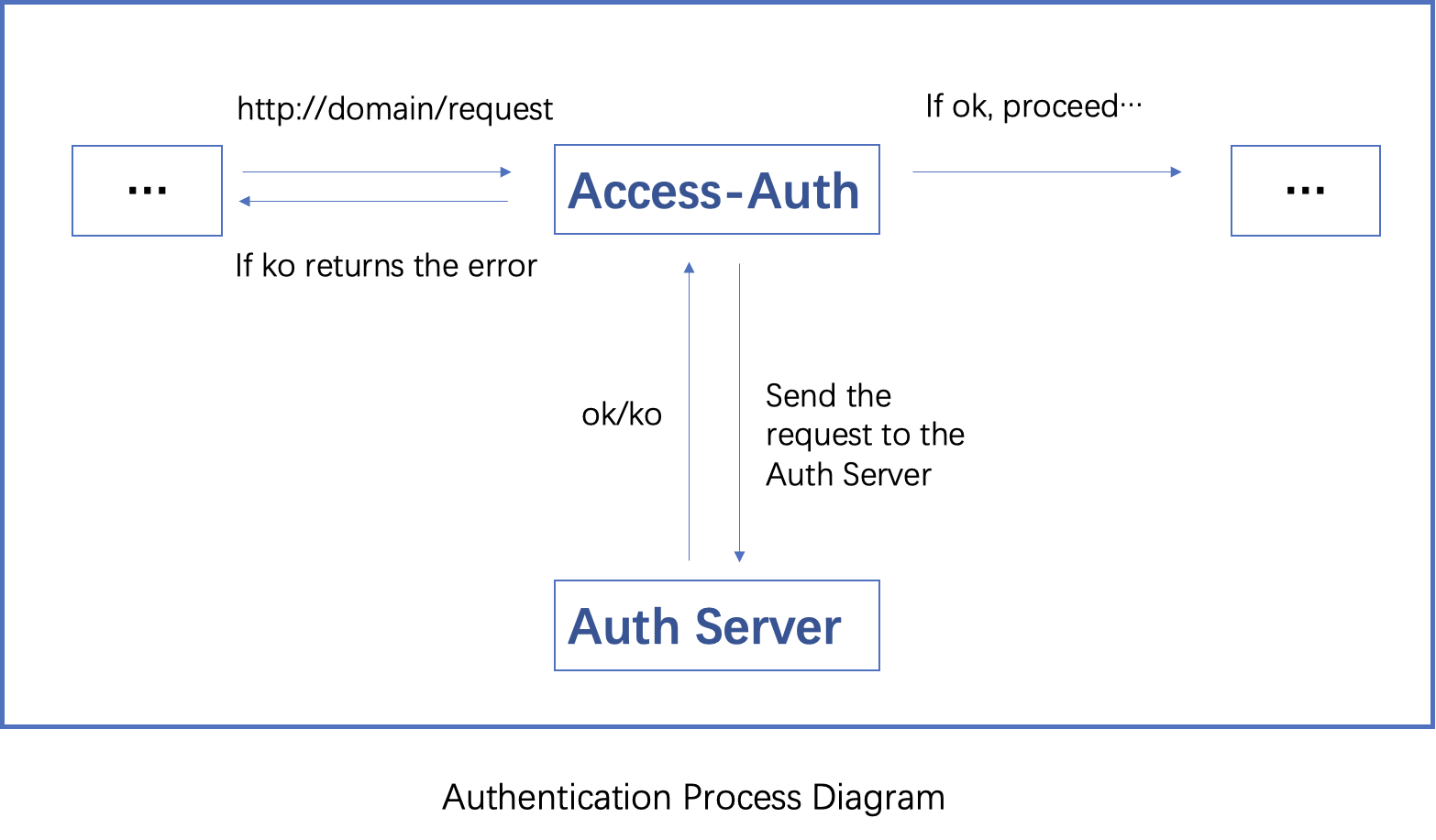 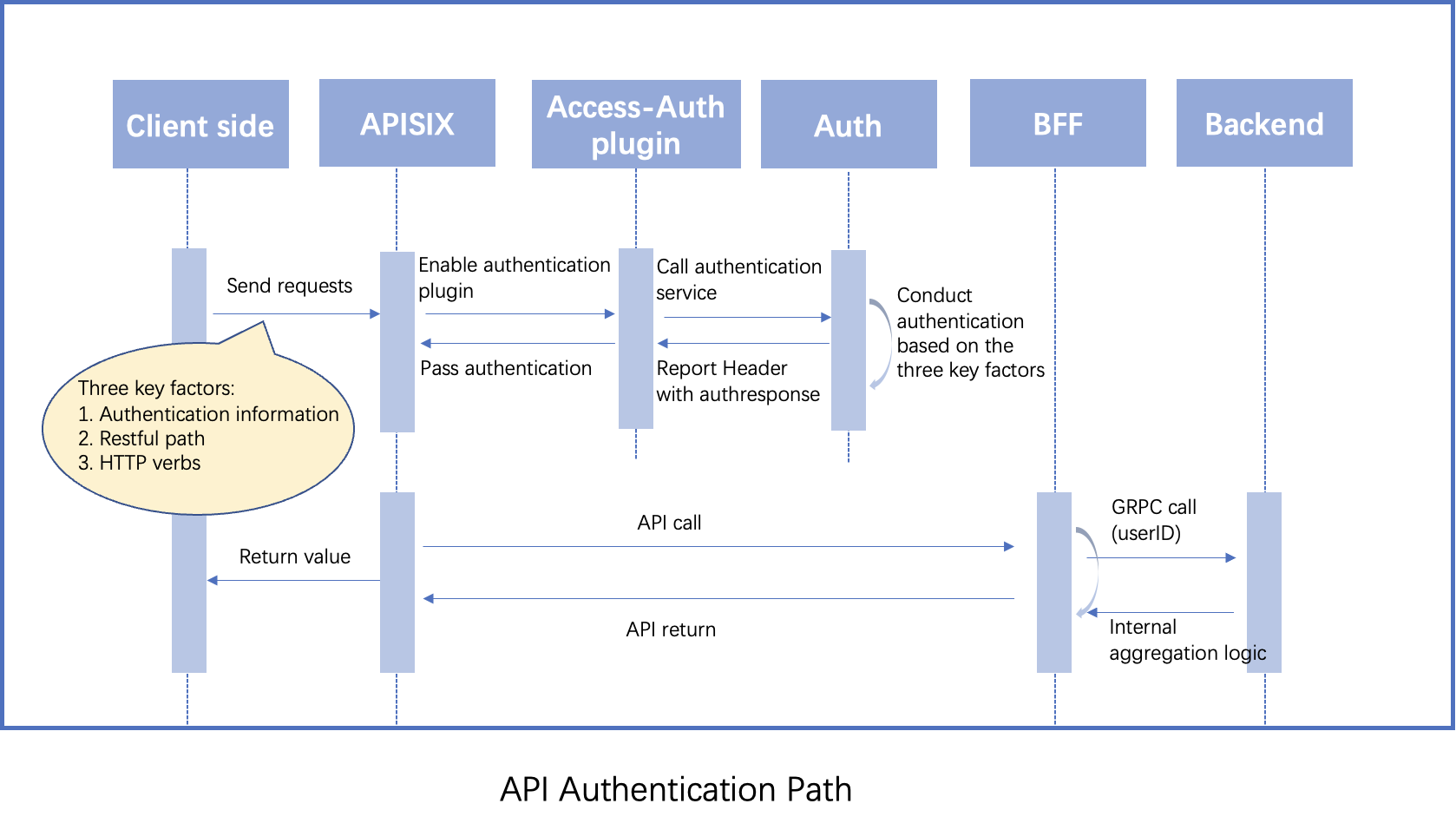 APISIX offers hot reloading of plugins developed internally. It saves time during development and enables users to change parts of their code without restarting the entire plugin runner. In this way, the developers can make adjustments to the interface in the backend, taking effect immediately, which is convenient and friendly for online release.

The user purchases blockchains through the Hyperchain blockchain platform. Then the upper-level businesses and developer clients can connect to the nodes. The services may connect to one or more nodes, and the users may access one or more nodes, which brings a problem: almost all nodes will be visited, burdening the visiting pressure of a single node.

It is relatively easy to handle in some private employment environments. However, too many nodes and public network IPs are required for those systems targeting internet users. The price of each public network IP of 4 megabytes of traffic can reach almost 200 CNY per month. There are thousands of nodes on the Hyperchains platform, which consumes high public IP costs.

APISIX manages all the visiting requests and distributes traffic to corresponding blockchain nodes. In this way, Hyperchain saved a high cost. 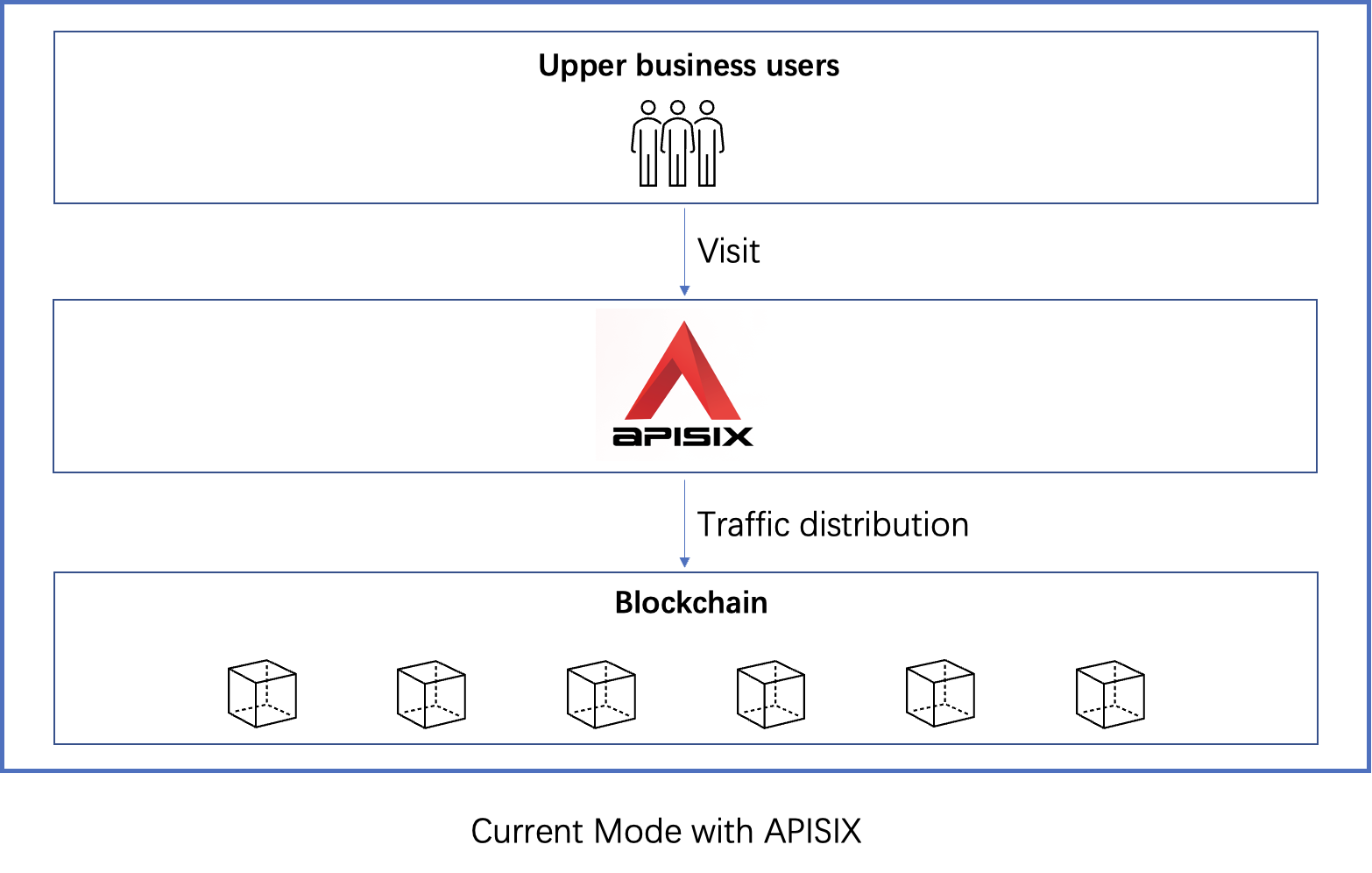 There are various blockchains on the Hyperchain blockchain platform, and each chain has various complicated RBAC permission control. Therefore, different kinds of certificates are required to be added on the client side, such as TLS certificates, which also puzzle users.

At present, APISIX’s key-auth plugin can be used to solve this problem efficiently. Authorized users can directly access the blockchain without worrying about permission configuration, as APISIX unifies the underlying chain.

As mentioned above, the nodes are visited frequently. High concurrency exists in most bank users as the TPS (Transactions Per Second) can reach 40,000-50,000 times.

It turns out that a single node on the blockchain is vulnerable because each transaction will impact the visited node.

Hyperchain deployed Apache APISIX on K8s with the Horizontal Pod Autoscaler. Since APISIX uses etcd with good dynamic scalability, it can effectively solve the problem of single-point traffic impact.

It seems that Hyperchain can utilize NGINX to solve its problems. However, after the trial, Hyperchain gave it up because

From the contents mentioned above, we know that Apache APISIX is a dynamic API gateway that can be applied in the blockchain area. Moreover, Apache APISIX provides rich traffic management features like Load Balancing, Dynamic Upstream, Canary Release, Circuit Breaking, Authentication, Observability, etc.

We hope APISIX can support more blockchain enterprises to enter another development phase. Welcome to learn more about Apache APISIX. You can contact us at https://api7.ai/contact.